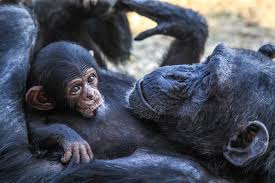 Wild chimpanzee females in western Tanzania who leave home or are orphaned take roughly three years longer to start a family. The researchers analyzed more than 50 years’ worth of daily records for 36 female chimps born in Gombe National Park. Stored in the Jane Goodall Institute Research Center at Duke University, the records are part of a larger database containing close observations of hundreds of wild chimpanzees, going all the way back to Goodall’s first field notes from the early 1960s. Several factors may contribute to the delay, the researchers said. Having left their family and friends behind, they must jostle for position in the pecking order of a new and unfamiliar group. In contrast, stay-at-home females benefit from better support. Females also started reproducing earlier if their own mothers were around while they were growing up, particularly if their moms were high-ranking — in part because females with high-ranking moms get better access to food.