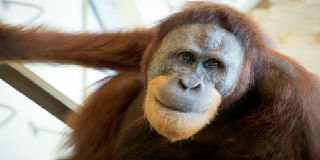 An orangutan called Rocky could provide the key to understanding how speech in humans evolved from the time of the ancestral great apes, according to a study led by Dr Adriano Lameira of Durham University and published in the journal Scientific Reports. Previously it was thought that great apes, our closest evolutionary relatives, could not learn to produce new sounds. As the human ability to speak is a learned behaviour it was therefore thought that this could not have originated from the great apes. It was also believed that control over the voice, or vocal fold action, which would give them the capacity to learn vowel-like sounds, was not an ability the great apes had. However, the research team found that Rocky, an orangutan living at Indianapolis Zoo in the USA, was able to copy the pitch and tone of sounds made by researchers to make vowel-like calls. The findings, which suggest that orangutans could have the ability to control their voices, shed new light on debates about whether or not spoken language stemmed from early human ancestors.