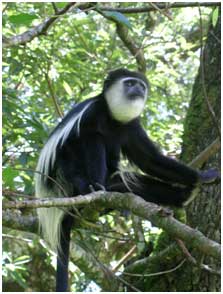 The two marmosets—small, New World monkeys—had been a closely bonded couple for more than 3 years. Then, one fateful day, the female had a terrible accident. She fell out of a tree and hit her head on a ceramic vase that happened to be underneath on the forest floor. Her partner left two of their infants alone in the tree and jumped down to apparently comfort her, until she died an agonizing death a couple of hours later.

Humans mourn their dead, of course, and some recent studies have strongly suggested that chimpanzees do as well. Scientists have recorded cases of adult chimps apparently caring for fellow animals before they die, and chimp mothers have been observed carrying around the bodies of infants for days after their death—although scientists have debated whether the latter behavior represents true grieving or if the mothers didn’t realize their infants were really dead.  But there has been little or no evidence that other primates engage in these kinds of behaviors. Indeed, a recent review of the evidence led by anthropologist Peter Fashing of California State University, Fullerton, concluded that there were no convincing observations of “compassionate caretaking” of dying individuals among other nonhuman primates, such as monkeys.

Fashing says that the new observations demonstrate that “like chimpanzees, common marmosets are capable of interacting with dying group mates. It is especially interesting because marmosets are cooperative breeders with unusually strong male-female bonds,” and “we would expect that these animals would be especially affected by the loss of their primary mating and social partner.” Nevertheless, Fashing cautions that because the report is based on just one observation, it is premature to draw conclusions about how widespread such behavior is in marmosets and other cooperatively breeding primates.