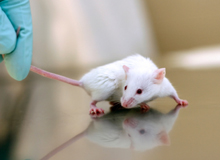 Johns Hopkins researchers say they have confirmed suspicions that DNA modifications found in the blood of mice exposed to high levels of stress hormone — and showing signs of anxiety — are directly related to changes found in their brain tissues.

The proof-of-concept study, reported online ahead of print in the June issue of Psychoneuroendocrinology, offers what the research team calls the first evidence that epigenetic changes that alter the way genes function without changing their underlying DNA sequence — and are detectable in blood — mirror alterations in brain tissue linked to underlying psychiatric diseases.

The new study reports only on so-called epigenetic changes to a single stress response gene called FKBP5, which has been implicated in depression, bipolar disorder and post-traumatic stress disorder. But the researchers say they have discovered the same blood and brain matches in dozens more genes, which regulate many important processes in the brain. “Many human studies rely on the assumption that disease-relevant epigenetic changes that occur in the brain — which is largely inaccessible and difficult to test — also occur in the blood, which is easily accessible,” says study leader Richard S. Lee, Ph.D., an instructor in the Department of Psychiatry and Behavioral Sciences at the Johns Hopkins University School of Medicine. “This research on mice suggests that the blood can legitimately tell us what is going on in the brain, which is something we were just assuming before, and could lead us to better detection and treatment of mental disorders and for a more empirical way to test whether medications are working.”