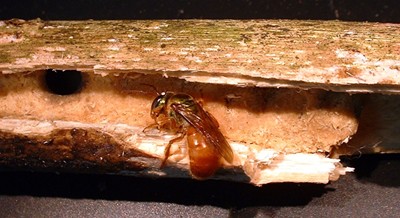 Nutritional stores are closely associated with social caste in many species.  In humans, access to high caloric food is a privilege traditionally reserved for the wealthy, while in social insects (e.g. bees, ants, and wasps) queens tend to have higher protein and fat stores than their relatively under-nourished workers.  These nutrient stores are linked to reproductive potential, and thus social caste, through multiple biochemical pathways.  Maternal provisioning behavior is an important source of variation in offspring developmental nourishment, which may affect offspring social behavior through morphological, physiological, endocrinological, and molecular responses. It is, therefore, possible that selection on maternal behavior is an important component of social evolution.

To investigate the importance of maternal effects on cooperative behavior, I study a facultatively eusocial sweat bee, Megalopta genalis, at the Smithsonian Tropical Research Institute on Barro Colorado Island, Republic of Panama.  These bees are unique because they can live socially (with some daughters remaining in their natal nest as workers), but have retained the ability to live solitarily (with all offspring dispersing).  This makes it possible to identify mechanisms linked to the appearance of social traits.

It is also possible to isolate developmental nutritional factors from other post-oogenesis maternal effects, due to the mass-provisioning behavior of this species.  M. genalis females provision individual eggs with a mixture of pollen and nectar inside each brood cell.  The brood cell is then sealed, and the offspring develops undisturbed for approximately 5 weeks until it emerges from the cell as an adult.  These maternally-supplied provisions are, thus, a significant factor in offspring growth and adult phenotype.

I am currently investigating the degree of variation in maternal provisioning behavior, along with associated variation in offspring body size, ovary development, hormone titers, vitellogenic protein stores, and patterns of gene expression in the brain.  Comparison of these results to those measured concurrently in adult queen and worker bees will reveal the degree to which maternal behavior shapes social behavior.