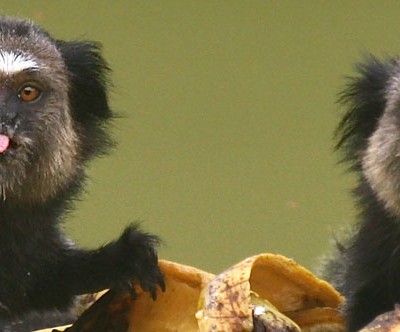 Our research into the biological and cultural evolution in neotropical primates has provided valuable contributions to primate biogeography, and carries broad implications for primate conservation biology and the evolution of Neotropical mammals in general. Below, Dr. Lynch discusses some of the findings of this ongoing research project.

Through our research, we have provided the first comprehensive molecular analysis for relationships among capuchin species (Lynch Alfaro et al. 2012). Our analyses indicate that the present widespread sympatry (co-habitation) between the two capuchin types across the Amazon results from a single explosive invasion (about 400,000 years ago) of robust capuchins from the Atlantic Forest into the Amazon, where gracile capuchins had been living in isolation. We proposed that the genus Cebus as currently recognized should be split into two genera to reflect this distinct evolutionary history: Cebus for the gracile forms and Sapajus for the robust forms. This taxonomic revision has now been adopted by the scientific community and is being used to guide conservation descisions. We have also shown Cebus albifrons as currently construed is paraphyletic, and the taxonomy in this group needs major revision (Boubli et al. 2012). In part as an outcome of this research, Lynch Alfaro was invited as an expert to participate in the 2012 workshop to evaluate the conservation status of all Brazilian primates for complete revision of the Red List of Endangered Primates in Brazil.

Our research group also provided the first whole mitochondrial genome tree for squirrel monkeys (in Chiou et al. 2011), with strong support for a sister relationship between Saimiri boliviensis and all other Saimiri, and for the monophyly of the clade Saimiri oerstedii and Saimiri sciureus sciureus. We found that the currently used taxon Saimiri sciureus is paraphyletic, and are currently sequencing a wider geographic set of genetic samples to determine boundaries of various monophyletic groups within squirrel monkeys. We inferred the crown lineages for extant squirrel monkeys diverged around 1.5 million years ago.

Our lab produced the first study explaining the role of ecology and behavior in shaping the evolution of the astonishing facial diversity of neotropical primates (Santana et al. 2012). We found both social and ecological factors drive the evolution of facial patterns, but in different ways. Facial patterns are more complex in primates that live in smaller groups and in species that are sympatric with more species in their own genus, suggesting that complex patterns may aid in species recognition. Darkness of coloration on certain parts of the face related to longitude and latitude, indicating a role for protection from solar glare. Facial hair was longer in higher latitudes, consistent with the ‘hair rule’. Our analyses gave the first integrated picture of different evolutionary forces working to shape primate facial diversity. We are currently analyzing facial pattern diversity in Old World monkeys, apes, lemurs and lorises.