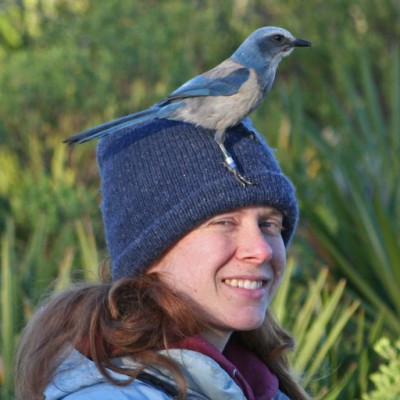 Michelle Rensel is a behavioral endocrinologist who utilizes a number of experimental and field-based tools to assess the complex relationship between hormones and behavior in birds. In particular, she investigates the role of steroid hormones (such as corticosterone, the primary avian “stress hormone”, and estradiol) in modulating cognition, as well as the capacity of the songbird brain to synthesize and/or modulate steroid hormone availability. She has conducted extensive fieldwork with free-living, cooperatively-breeding Florida scrub-jays as well as captive work with Western scrub-jays and zebra finches. In addition to assessing circulating steroid hormones, she investigates the role of steroid hormone synthesis and activity in the central nervous system using molecular techniques such as quantitative RT-PCR (to investigate expression of hormone receptors and steroidogenic enzymes) and in vivo microdialysis (to measure local steroid hormone levels in brain). Her current research focuses on the role of the corticosterone-inactivating enzyme 11 beta hydroxysteroid dehydrogenase in regulating access of corticosterone to discrete neural circuits.

In addition to her research, Dr. Rensel teaches several courses within the Institute for Society and Genetics. Current courses include:

Schoech, S.J. and Rensel, M.A. 2009. Environment, glucocorticoids, and the timing of reproduction.  General and Comparative Endocrinology 163: 201-207.